Gear: digital photography in the wilderness

Is digital photography up to the challenges of extended outdoor adventures in harsh conditions? A year ago, I would probably have answered: no. As a trekker and mountain climber, it was actually the main reason why I stuck with my film SLR.

That is, until this spring, when I could not resist the call of the new EOS 10D. And when I embarked this autumn on a climbing expedition to the Himalayas, I intended to photograph digital.

The purpose of this article is to share my planning process and conclusions, focusing on the specific questions and issues that outdoor photographers face on longer trips (I assume we want to use a a high-quality setup, but I won't discuss the merits of specific cameras, lenses or tripods, nor shooting techniques).

What makes outdoor adventures fantastic experiences is precisely what makes digital photography challenging: there is no power grid readily accessible, the weight one can carry is very limited, and the environment is not exactly as electronics-friendly as in a fashion studio. Those challenges go hand-in-hand:

It was clear that any hard-disk based solution (microdrives and storage systems) should be excluded: when you invest so much in such a trip, you don't want to see all your images just disappear because of a (probable) disk failure. A laptop was also out of question, for power requirements and weight reasons too.

I now needed power for the camera and the CD burner. After doing some research, I discarded the obvious solar charging solution: to be reliable, it needs a high-quality panel and a regulation system, too heavy and expensive.

The next candidate solution was non-rechargeable external lithium battery packs: specially designed for extreme conditions and filming expeditions, they are lightweight and have a good capacity. A 7,5 V pack could directly power the camera, but having an SLR tethered to an external pack is obviously not an appealing perspective for climbers. Another option would be a 12V pack to power the CD burner, that could also act as a power source to recharge the original camera battery, although in practise energy would be wasted in the charging process and the non-rechargeable pack's lifetime would be greatly reduced. A 12V/100Wh pack has about 8 times the capacity of both the camera's and the CD-burner battery packs. Interesting solution, but its necessary testing would require time and money I did not have (a single 12V pack costs between $150 and $300, plus in my case import taxes and shipping delays to Europe).

The (rather proprietary) Apacer battery lasts for about 2 hours in standard conditions, equivalent of about 25 CDs. Shooting on average 75 pictures per day in RAW format (climbing would keep me otherwise busy), I would burn less than 2 CDs per day on average, including backup CDs. So, in theory, the burner's battery would be just enough for the time we'd spend in the wild.

I charged all batteries in Kathmandu before leaving to the mountains. I made sure they were exposed as less as possible to the cold, keeping them in my sleeping bag at night, and kept the devices turned on only when needed.
I did not use the camera's LCD display: I had learned enough about the camera to expose properly, albeit not optimally, without checking the histogram. For the record, I always used selective metering and often metered on the brightest (white) area, over-exposing by about 2 values.

I soon run into trouble with one CF-card: the CD burner would not accept it, but the single "error" LED would not tell me the reason. After multiple tries in different conditions, I had to recognize that I would not be able to use that card anymore (the camera could still display the images stored on it). I still had the backup card, but I obviously got worried...

I needn't, and my film SLR stayed in its waterproof bag all the time. After 2 hours and 10 minutes of mainly successful operation, when we reached civilization again the CD burner still had power. I did not get any corrupted image file, and I transfered the pictures stored on the "faulty" CF-card directly from the camera to my PC, back at home, without any trouble, so I did not lose any image. The lifetime of the camera's battery packs, when not using the LCD, simply amazed me: 3 packs would have been enough!

Seing how hard and committing climbing at high altitude is, I actually hardly can imagine carrying above base camp anything heavier than a couple of standard battery packs for the camera. Actually, the 300D would probably have been more suitable...

Every morning, fog would set on our base camp at 10:30 for the rest of the day: it's not pleasing, but it would have become a nightmare had I gone for a solar-powered solution.

Simple is beautiful. I took a risk when deciding to go this light and take only standard battery packs along, but it seems it was the right thing to do. Some things I have learned:

Last but not least, I am not suggesting that my choice is the ultimate solution. Thanks to the work of the engineers who designed those products, It worked for me and, although simple, met complex requirements, but there are surely other good ways to achieve the same goals. Your feedback is welcome!

So, back to my initial question: is digital photography up to the challenges of extended outdoor adventures in harsh conditions? Yes... but with backup solutions.

Photographs from this trip can be found in the section on Nepal Himalayas.

(Feb 5. 2004)
I have been asked several times the same good question: why in the first place did I chose to use a digital camera and carry the necessary equipment when a film camera would have been lighter and a safer choice? I'm tempted to give the same answer as climbers often do when they are asked why they climb mountains: "because they are there"...
But more seriously, a digital solution is not clearly superior to a film-based solution since it has its own drawbacks, but the advantages I saw, and that were important to me, are:

Now that I have understood that even battery consumption is not a big issue, I will use the same solution on my next trips. The combination of a DSLR and a film body of the same brand as a backup is an excellent solution, both in terms of protection against failure and in terms of choice made available to cope with different situations. 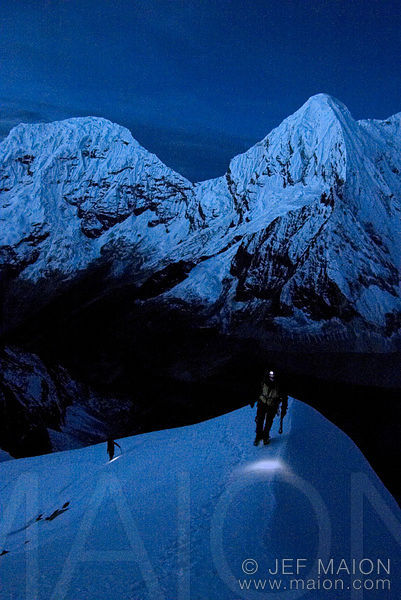